BY CHARLOTTE CUTHBERTSON | The Epoch Times

DEL RIO, Texas—Border Patrol agents have arrested 353 illegal aliens with sex-related criminal convictions so far this fiscal year. A large number of the detainees had prior convictions for crimes involving a minor.

The number of criminals illegally crossing the southwest border has spiked in tandem with the border crossing surge this year. Convicted criminals are the most likely population of illegal aliens trying to avoid capture by Border Patrol.

Border Patrol has detected more than 250,000 illegal aliens who have evaded capture so far this year, according to the newly-appointed Acting Border Patrol Chief Raul Ortiz on June 24. It’s impossible to estimate how many have evaded Border Patrol without detection.

“There isn’t a day that goes by that I don’t read a paper or a report from my agents that talks about criminal aliens, sexual offenders that they’ve apprehended out there,” Ortiz said during an event in Del Rio, Texas.

“Those folks aren’t getting released in these communities. Guess what happens to them? They go to jail. When they get out of jail, they go back to their country of origin.”

According to reports by Customs and Border Protection (CBP), many of the criminals being caught have already been deported, sometimes on multiple occasions.

On June 24, agents in Rio Grande City, Texas, arrested convicted sex offender, Benito Gomez-Lopez, from Mexico. Gomez-Lopez was arrested in May 2020 by the Burleigh County Sheriff’s Department in North Dakota for possession of certain prohibited materials and promoting a sexual performance by a minor, according to CBP.

He pleaded guilty to both counts and was sentenced to three years confinement, but was repatriated to Mexico in July 2020.

On June 14, a Peruvian child rapist was arrested by Border Patrol after he entered the United States illegally near Roma, Texas, according to CBP. Pedro Asuncion ORE-Quispe, 43, had been deported in 2020 after serving over five years for felony rape of a child in Idaho.

On June 20, Mexican national Isidro Efrain Gallardo-Rangel was apprehended as part of a group of 24 illegal aliens near Laredo. Gallardo-Rangel is a registered sex offender with an extensive criminal history and a conviction for indecency with a child in 2018 in Dallas, Texas, according to CBP. 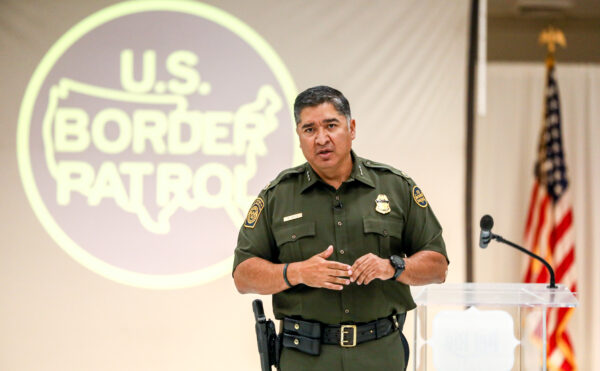 Once a relatively quiet region for illegal border crossings, the Del Rio Sector in Texas is now the second busiest, after the Rio Grande Valley in south Texas.

“We’ve gone through this before—we’ve seen these increases, these surges, for the last 30 or 40 years. It’s never been this bad. I’ll tell you that straight up, I’ve never seen it this bad.”

Skero said the sector has seen a 1,400 percent increase in the number of sex offenders arrested by Border Patrol agents.

A photo from a game camera that caught illegal aliens walking through private ranch land in Jim Hogg County, Texas, on March 25, 2021. (Courtesy of Susan Kibbe)

A Del Rio resident said that prior to January he had seen two illegal aliens pass through his backyard.

“I have four daughters—does it concern me when you say there’s a 1,400 percent increase in sex offenders? Yes, it concerns me,” the resident said during a border update on June 24.

“I’m concerned about the single men who are running through my backyard, sneaking. And I’m about a 50 percent  success rate on whether or not I get an agent to come out to my place when I call. And when they do, it’s awesome, they bring helicopters, they bring support.

“Otherwise, I’m sitting there unarmed and there’s a guy soaking wet in my backyard screaming at me in Spanish. I don’t know what to do with this guy.”

The resident asked Border Patrol if they could provide some type of training to citizens to prepare them for such encounters.

Skero suggested for residents to not engage with illegal aliens who are on their property and to call Border Patrol.

“We’re going to come just as soon as we can. Sometimes it will be immediate, sometimes it might take us an hour.”

But, he said, if an illegal immigrant is endangering a resident’s family, or is being assaultive, call 911. 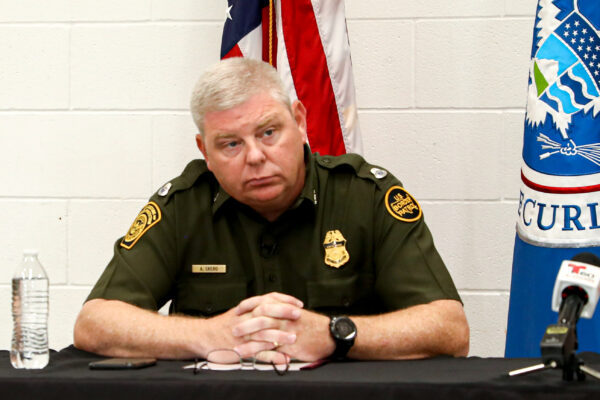 In the three months from March 4 through June 3, DPS has arrested 1,489 criminals.

In addition, State Troopers have been involved in 340 vehicle pursuits along the border and have dealt with 630 vehicle bailouts. A bailout occurs when a vehicle being pulled by law enforcement stops and the illegal immigrant occupants scatter and flee to avoid capture.

Abbott issued a state of disaster declaration on June 10, highlighting 34 border counties that are struggling with cross-border crime and illegal immigration.

“We’re going to start making arrests, sending a message to anyone thinking about coming here: You’re not getting a free pass. You’re getting a straight pass to a jail cell,” Abbott said.

Last week a prison unit in Dilley, Texas, was being emptied in preparation for illegal alien criminals.

Abbott and Arizona Gov. Doug Ducey also issued a call for help to other governors on June 10.

“With your help, we can apprehend more of these perpetrators of state and federal crimes, before they can cause problems in your state,” Abbott and Ducey, both Republicans, wrote in a letter.

Oil prices down after hitting…

American Suicide: While China And…