BY ZACHARY STIEBER | The Epoch Times

White House officials are directing officials in states across the nation to utilize COVID-19 relief funding to try to combat rising levels of crime, including shootings and homicides.

President Joe Biden’s recently unveiled strategy to combat crime has at its core a partnership with cities and states, giving them “historic levels of federal funding and a range of tools to address the multifaceted challenge of gun violence,” Susan Rice, assistant to the president for domestic policy and head of the Domestic Policy Council, and two other officials wrote in a memorandum.

“In particular, the strategy uses the American Rescue Plan’s $350 billion in financial support and clear guidance to provide state, local, territorial, and tribal governments the money they need to put more police officers on the beat—including hiring above pre-pandemic levels in communities experiencing an increase in gun violence associated with the pandemic—as well as the other resources, training, and accountability they need to engage in effective community policing.”

The Biden administration has made clear that the funds, ostensibly allocated to mitigate fiscal effects stemming from the COVID-19 pandemic, can be used for “evidence-based community violence intervention programs, summer employment and educational opportunities, and other investments that we know will reduce crime and make our neighborhoods safer,” the memo states.

The memo was sent to local and state officials across the nation. 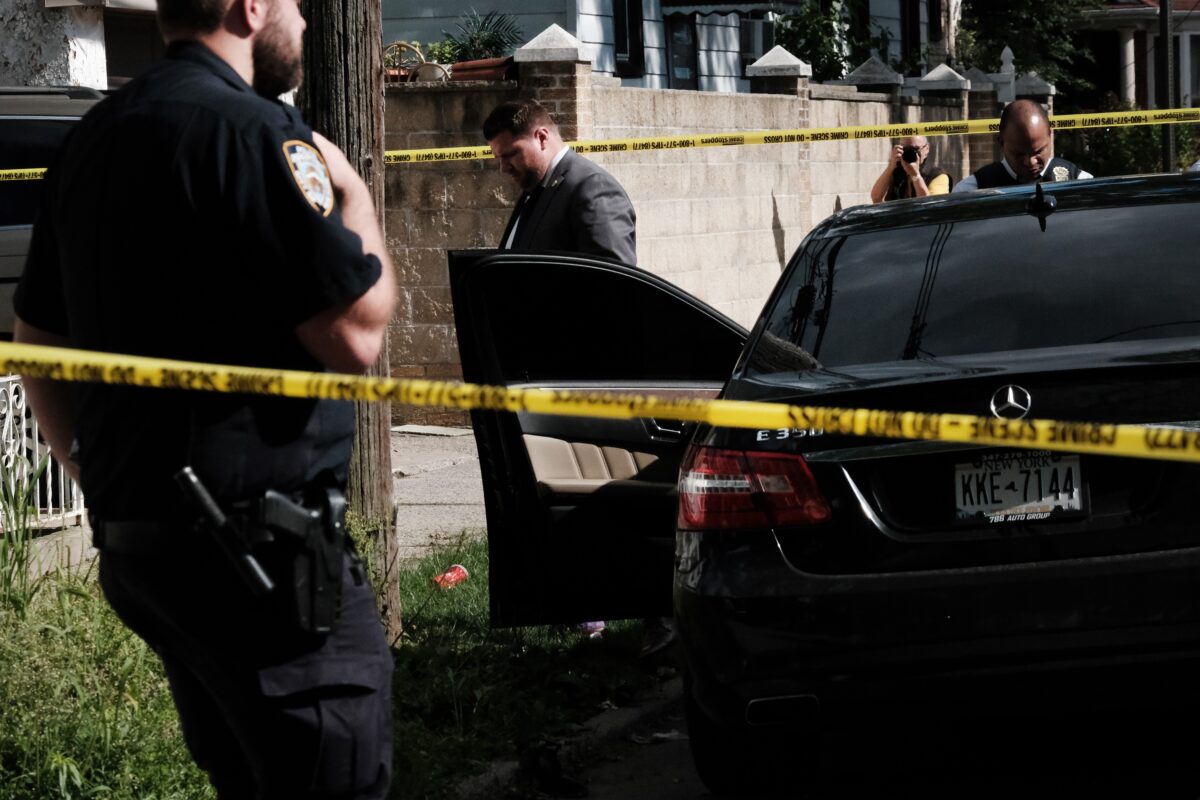 Police investigate the scene of a shooting in Brooklyn in New York City on June 23, 2021. (Spencer Platt/Getty Images)

Major cities and other locales have experienced higher levels of crime since the start of the COVID-19 pandemic, and the surge has continued in many areas.

In New York City, for instance, the number of murders was tracking almost 11 percent higher as of the end of June than during the same time period the previous year. Los Angeles has seen a 24 percent increase year-to-date from 2020 as of July 3.

Rising crime is caused in part by anti-police sentiments supported by many politicians, said Maria Haberfeld, professor and chair of the Department of Law, Police Science, and Criminal Justice Administration at John Jay College.

“Crimes are committed when there is a will, a target, and an absence of guardians. In the aftermath of the anti-police rhetoric that swept the country in the past year, many officers retired or left the profession and many of the ones who stayed are deterred by various anti-police actions like the move to eliminate qualified immunity or serious constraints on their ability to use justified force,” she wrote in an email.

“There are always those who want to commit crimes and plenty of targets out there. What keeps the statistics lower is the presence of motivated police officers—well, we lost plenty of those in the past year,” she added. “In addition, the more liberal laws passed in the recent years like the bail reform in NY emboldened the criminal actors even further.”

Biden met with Adams; Washington Mayor Muriel Bowser; San Jose, California, Mayor Sam Liccardo; and police officials from cities across the country on July 12 “to discuss his comprehensive plan to reduce gun violence and violent crime,” White House press secretary Jen Psaki told reporters in Washington ahead of the meeting, which was held at the White House.