According to an attendee, hors d’oeuvres and drinks were consumed while the violin softly played and “art aficionados gazed at works that appeared mainly to be reproductions.” Displaying reproductions of Hunter’s “art” is likely less expensive than shipping the art to the exhibit.

With such an exclusive list of socialites, there was a “security presence greater than usual at an art event” to keep a barrier between the elites and average Americans, the report reveals.

The elitist reception also reportedly featured a handful of people who wore Chinese coronavirus masks, though vaccination “proof was required for entry—Garcetti kept his on the entire time he was present,” the attendee’s report of the scene told Mother Jones. 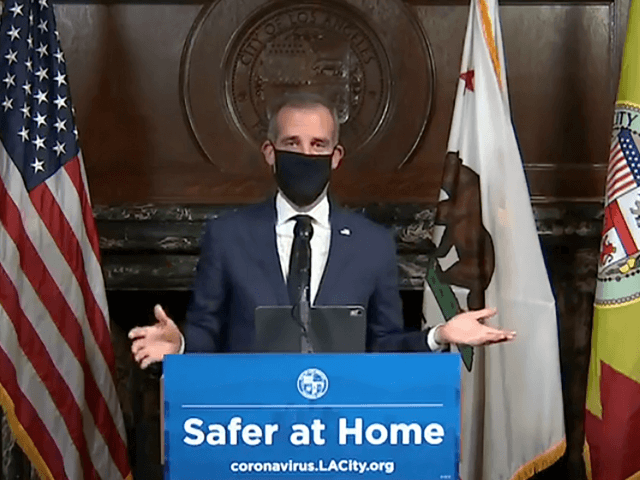 Hunter’s Los Angeles “art” exhibit is one of two that are reportedly scheduled. The second event will apparently occur in New York City at an unknown time, much like the Los Angeles show. The dates of the shows have not been divulged due to the sensitive nature of the president’s son personally showcasing his art to prospective in-person buyers at the art events.

“The only way to address these issues is with greater transparency — not less,” he told Breitbart News. “Their proposed solution is greater secrecy, not transparency. And they are essentially saying, ‘Trust Us.’ Joe and Hunter Biden’s track record on such matters gives us no reason to trust them.”

Yet Hunter has defended his new “art” career from critics and watchdog alike. “Fuck em… Look man,” Hunter Biden explained on the Nota Bene Podcast, “I never said my art was going to cost what it was going to cost, or how much it would be priced at. I would be amazed, you know, if my art was sold, for you know, for, umm, for ten dollars.”

“I’m [the] most famous artist in MAGA world, at least,” Hunter facetiously said before suggesting President Joe Biden believes “everything” Hunter does “should be in National Gallery” of Art.

The White House has also defended Hunter’s “art” scheme. “I can tell you that after careful consideration, a system has been established that allows for Hunter Biden to work in his profession within reasonable safeguards,” press secretary Jen Psaki stated. “He has the right to pursue an artistic career just like any child of the president has the right to pursue a career.”

Meanwhile, art dealer Bergès, who reportedly was sued for fraud and breach of contract in 2016 by an investor in his gallery, also filed for personal bankruptcy in 1998, and “his creditors included credit card companies, a bank, a jeweler and furniture retailer Pier One Imports.”

Bergès has also advertised his strong ties to China, which is concerning, given Hunter’s former work history with Joe Biden and his family ventures. Breitbart News previously reported on those projects:

Hunter’s past work as his father served as vice president — striking deals with Chinese officials and raking in tens of thousands of dollars per month serving on the board of Burisma, a Ukrainian oligarch-owned oil and gas company, despite having no experience in the energy sector. His father would later brag about threatening to withhold aid from Ukraine unless officials fired the prosecutor conducting a corruption investigation into Burisma.

Notwithstanding President Biden’s son’s new venture, Hunter told Artnet in June that “My dad loves everything that I do, and so I’ll leave it at that.”

Oil prices down after hitting…

American Suicide: While China And…

Here’s How Many Afghan Refugees…