The rate among soldiers was nearly double that of sailors, DOD’s annual suicide report found.

The suicide rate for active-duty troops rose to 28.7 per 100,000 last year, up from 26.3 the previous year, according to the latest edition of an annual Defense Department report. This is the highest rate since the Pentagon began keeping detailed records in 2008.

The year-over-year change to the suicide count is not “a huge increase” but the increase to the rate over time is “cause for concern and there needs to be renewed focus to specific suicide-prevention intatives,” said Julie Cerel, who leads the Suicide Prevention and Exposure Lab at the University of Kentucky. “What they have been doing hasn’t been working and they need to do something different and more sustained.”

Counting deaths by suicide is not an exact science, and official tallies can change as new information emerges. In statistical terms, the figure given as each year’s rate represents the midpoint of the 95%-confidence range. That’s why Karin Orvis, who leads DoD’s Defense Suicide Prevention Office, said the rates in 2019 and 2020 are “statistically comparable.” 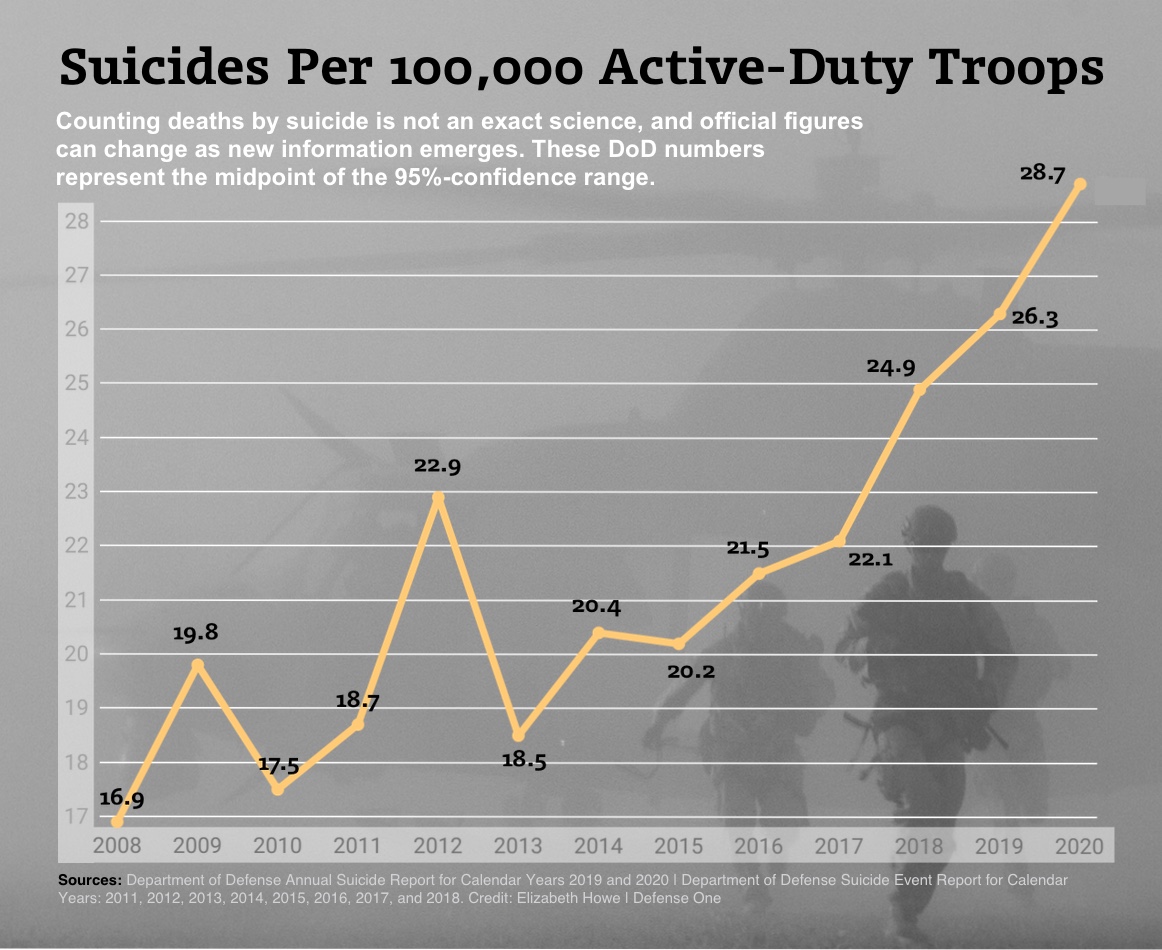 Orvis spoke during a Sept. 30 news briefing in which the report, “Calendar Year 2020 Annual Suicide Report,” was released by the Office of the Under Secretary of Defense for Personnel and Readiness. The 100-page document tracks deaths by suicide among service members and dependents. It also tracks Pentagon efforts to prevent suicide by providing resources and training to troops and families.

Defense Secretary Lloyd Austin called the findings of the report “troubling.” The increase in rates is occurring amid an effort by the Pentagon and Congress to increase suicide prevention programs and mental health support.

“As I have said, mental health is health—period. We must all do more, at every level, to end the stigma against getting help. We all need counsel, community, and connection. Reaching out is a sign of strength and resilience,” Austin said in a prepared statement Sept. 30.

But the best way to understand the prevalence of deaths by suicide in the military population is its rate per 100,000 people, because the number of suicides alone does not reflect changes in population size, Army Maj. Gen. Clement Coward, the acting executive director of the Office of Force Resiliency for the Under Secretary of Defense for Personnel and Readiness, said at the briefing.

Only the active-duty force saw a statistically significant increase in the suicide rate from 2016 to 2020. The rate among reservists and National Guardsmen stayed statistically flat, the report said.

And while the 2020 numbers for the U.S. population have not been released, the data from 2019 shows that the suicide rates for service members in the active component, Reserve, and National Guard are comparable to the U.S. population after accounting for age and sex, Orvis said.

Orvis said the numbers did not indicate an increase related to the COVID-19 pandemic. Still, the Pentagon remains concerned that the social isolation and economic effects of the pandemic may increase the risk of suicide for some service members, Coward said. The Defense Department will continue to monitor the pandemic’s effect on the force and support efforts such as mental health resources via telehealth, financial counseling, and emphasizing social connectedness, he said.

Some services are more at risk

While the year-to-year increase to the suicide rate of the active component is small, its steady increase over time is concerning, since it ideally should be decreasing or stagnant, according to Rajeev Ramchand, the codirector of the RAND Epstein Family Veterans Policy Research Institute.

“You never want to see the rate increasing,” said Ramchand, a senior behavioral scientist at the RAND Corporation.

Ramchand was struck by the differences in suicide rates for the service branches, especially the Army’s 36.4 per 100,000—nearly double the Navy’s 19.3.

“When you look at the trends, they’re so different from each other by service branch— the Marine Corps, the Navy, the Air Force, the Army—had just totally different rates and different trends. And so I think we have to start really looking at these sub-populations by service branch specifically,” he said.

As in earlier years, the service members with the highest risk of suicide in 2020 were enlisted men who are younger than 30 years old.

“This demographic—enlisted, male, and under the age of 30—made up 42 percent of the total military population for calendar year 2020, but about 63 percent of our military suicide decedents for that year,” Orvis said.

The report highlighted some of the prevention efforts underway in the Defense Department and the individual services branches.

“Just as there’s no single reason for suicide, there’s no one single solution to prevent suicide,” Orvis said. “Like you, we are very concerned about the suicide rates in our military, and we must do all we can to prevent these tragedies. At the department, we’re taking proactive measures. We’re developing new programs related to help-seeking, problem-solving, and means safety, and we’re working with federal and non-federal partners.”

One new effort is a pilot program that has soldiers complete an annual wellness check with a counselor. The Defense Department is also developing and piloting a training program that would include suicide prevention in firearm safety training.

Cerel said the DOD is working hard and even leading the way to find solutions for complex issues like suicide, in part by funding research and new strategies. Cerel receives funding from the DOD’s Military Suicide Research Consortium.

Firearms continue to be the most common method of suicide across the military, followed by hanging or asphyxiation, according to the report. Service members are also more likely than their civilian counterparts to die by suicide using a firearm.

Cerel said while firearm safety and wellness checks are good, the bigger challenge is changing the culture regarding handling firearms and seeking help. The time when a service member is in a crisis may not necessarily be when they are doing the wellness check, she said. And many service members are still concerned that seeking help could affect their job.

A policy change regarding safe storage of firearms would help show it’s important to prevent suicide and accidental death, but culture change is needed to back it up, she said.

Illegal Migrants from all over…

Catholic Bishops to Vote on…

Protesters Threaten to “Shut It…

Defense Moves for Mistrial in…

US now in ‘biggest’ border…

Bongino Will Be Off The…